On our final day, we woke up, feeling ready to be back in the comfort of Montana. The trip had been great and given us a taste for what was to come in our end of semester road trip that we are planning in May. Our final day was spent on the road mainly, except for a stop in Idaho Falls for waterfall gazing and pizza, as well as testing out our photography skills with long exposure photos. 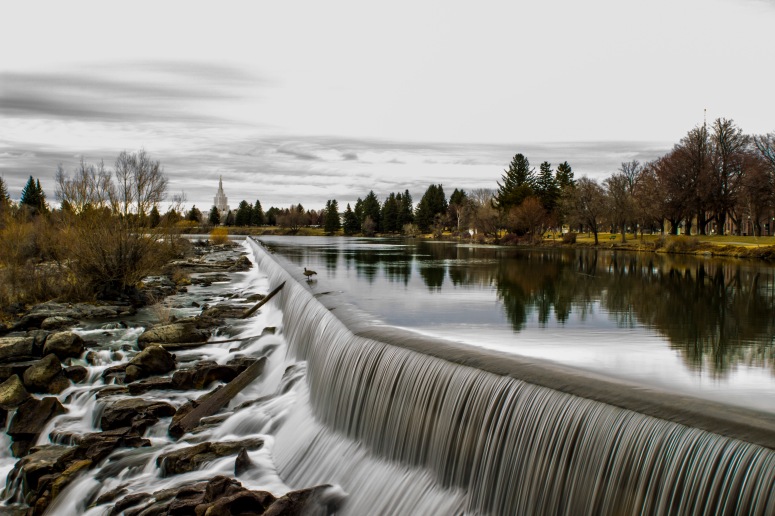 The falls were beautiful and in the background, the Mormon temple could be seen, completing the picturesque view over the water. It was also where I managed to find a hotel with the same name as me which made me a little excited.

After a couple of hours, there we kept driving and stopped on the side of the road to stretch our legs, it was here that the snow was waist deep, which meant every time that we took a step, our feet would fall through the snow, making it very difficult and also hilarious to walk in.

Our final stop of the day was at Henry’s Lake, Idaho which was a gorgeous place, snowy mountains surrounding an almost frozen lake, with a yellowstone trout farm to the side of it. We may or may not have trespassed to get to the shore, but since it was off season, it meant that no one was around to tell us not to go there. Sometimes the landscapes in this part of America don’t even feel real, they look like something on a postcard that you could only have imagined before now. Henry’s Lake was one of those places.

We also came across this grand abandoned house overlooking the lake, all boarded up. I think that the best thing about travelling in such a huge country by car is that you get to see so much, so many places that aren’t in the guidebooks or on the beaten trail. Places where people live and work, and where the culture is so different to the one in which you grew up. That is what I love about this form of travel and despite Shane the Chevy’s issues, I hope he holds on so we can see just a little bit more of the great old USA.